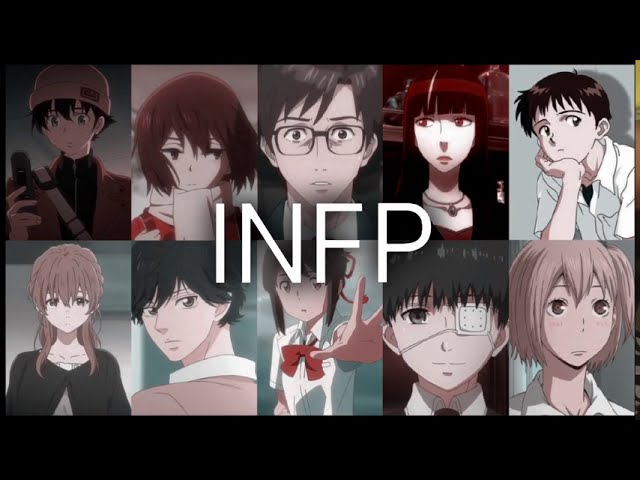 We all have favourite anime characters that we can’t seem to get enough of. Whether they’re rugged, strong, or a complete knucklehead, there’s always something about them that draws us in. Characters in anime battle for what they believe in, uphold their ideals and strive to make the world a better place.

In addition, anime has a lot of creative value, with dramatic colours and drawings depicting the inner worlds of the characters’ emotions. Going forward in this article, we will talk about the best INFP anime characters that you would love to watch in action. These characters stole the limelight whenever they were featured in some scene. But before that, you need to know who are INFPs.

Prologue: Who Are INFPs?

The Myers Briggs personality test, sometimes abbreviated as MBTI, identifies 16 personality types based on the preponderance of these characteristics. INFPs have a high level of Introversion, which implies they prefer to be alone and find more peace in themselves than when they are among other people.

INFPs are also known as Mediators, and their key characteristics revolve around their meek, quiet demeanour. Mediators, also known as INFPs, make up roughly 4% of the population, making them a relatively uncommon personality type. They are typically calm and open-minded, with a compassionate and innovative attitude to whatever they undertake.

INFPs are also noted for being idealistic and philanthropic, and they are likely to see the best in everyone, to the point of naivete. The possibility of being misunderstood is a typical concern that virtually all INFPs experience, and as a result, when they do find like-minded people to spend their time with, they are devoted and delighted to a fault.

Mediators, also known as INFPs, belong to the Diplomat Role category, which implies they are guided mostly by their values rather than reasoning, enthusiasm, or pragmatism. The Infp anime characters is more concerned with the purity of their goal than with rewards and penalties, thus when it comes to deciding on moving forward, they are more inclined to search for honour, beauty, morality, and virtue.

INFPs are rightfully proud of this trait, but unfortunately for them, not everyone understands the motivation behind these sentiments and decision-making processes, which may leave them feeling lonely and alienated. To check out the best INFP anime characters, go through the following article.

Crona is a bashful young woman who has yet to declare her gender. Crona is a key enemy in the Soul Hunter series, where both Medusa and Ragnarok reared and mistreated them. Crona took the brunt of the abuse, which triggered a cascade of bad ideas in her head, turning them into villains.

They displayed a mentally ill aspect of themselves that they couldn’t control since they didn’t know the difference between right and wrong. Crona became a psychopath following a childhood in which they were raised to murder and kill alone, making it the only purpose of their existence.

Crona began to adjust and make some behavioural changes after meeting some new and steady individuals who recognised what was wrong with her and what might be remedied. This is one of the best INFP-T anime characters.

Neji Hyuga, a member of the Hyuga clan’s branch family, suffered major losses as a child, leading him to hate his clan so much that he planned to murder his cousin. Neji was the most gifted kid in his class, scoring high on all of his examinations. Neji was scarred by his history and thought that nothing, not even hard labour, could improve his fate.

He assumed that because he was born into the branch family, he would always be their servant and that there was nothing he could do about it. When he faced Naruto, a weak boy at the time, he recognised that hard effort and dedication could transform one’s fate, and that brilliance was not the sole requirement for success.

After learning the truth about his father’s death, Neji altered his ways and became more devoted to his tribe. He stopped disliking his cousin Hinata, formed a stronger relationship with her, and began training her to become as powerful as possible (since she was the clan’s successor).

When the ninja war began, Neji was instrumental in its success, and in the end, he sacrificed his life for Naruto and Hinata, demonstrating to Naruto that there is so much more worth fighting for. Considering his style, he is considered one of the best INFP-T anime characters.

Yamaguchi is a volleyball character from the anime Haikyu. He plays for the Karasuno high school squad as a substitute. Yamaguchi works incredibly hard, even after typical practice sessions, to develop in one aspect of the game, “floater serve,” even though he doesn’t play much and is aware of his lack of skill in comparison to others.

He seeks out a local former volleyball player to assist him in learning the sport, and he eventually outgrows the fearful boy who couldn’t display his skill due to fear. He gets along with everyone on the squad and normally keeps to himself. He only has one friend on the team. Yamaguchi keeps him in check and grounded anytime he’s feeling low, questioning himself, or upset. Yamaguchi is one of the most interesting INFP-T anime characters.

Shigeo Kageyama is a young child who realises that his emotions give him strength. When he’s furious, he can cause harm to others. He loses control at first and injures numerous individuals, but he learns to manage his emotions to protect others around him. He is a socially awkward individual who pays little attention to what others are thinking.

He keeps to himself and prefers to avoid others, a trait that grew stronger once he discovered his gift. Later on, he finds friends and develops particular relationships with them, always prepared to put his life on the line for them when they are in danger. Shigeo is one of the best INFP-T anime characters.

One of the most skilled INFP anime characters characters anime, Shikamaru Nara is one of the most intelligent characters in the Naruto universe. He can make quick decisions and lead his team to success. He was the first in his class to be elevated to a greater degree of responsibility. He is a quiet individual who only speaks when necessary and always maintains control over the people he cares about.

He keeps an eye on his buddies and assists them when they are in need. Even though he lost many close friends, Shikamaru was one of the first persons among children to take on a leadership role and see that it is time for their generation to develop and share the load.

Shikamaru is a pivotal figure in the Great Ninja War, rising to vice commander of his unit and making several choices that aid the war effort. In the end, his wit earned him a position as the sixth and seventh Hokage’s counsellor.

Erwin Smith, the commander of the Survey Corps, was a devoted individual who wished to rescue mankind from Titan’s constraints. Erwin pledged himself after hearing an idea about what may lie beyond the walls: he would fulfil his goal no matter what. Erwin stays in his own world just like several other INFP anime characters.

He paid the price for his ideas by sacrificing several of his soldiers and his arm. He was a genius who was always a step ahead of the opposition and was willing to give up his life if necessary. Finally, he had to choose between his goal and the others, and he chose to give up his life so that the others may live and potentially have a brighter future.

This one did set a mark as what anime characters are INFP. The protagonist of the popular series Death Note is Light Yagami. Yagami was a bright student who aced every test he took in high school and college. He despised criminals and wished to see them executed. Light began his adventure as a peacemaker who killed people in jail after discovering a mystical book that kills everyone whose name is inscribed on it.

This drew attention, and many people began to refer to him as Kira, a justice-seeker, while others despised him and wanted him dead. The mind games began when he joined a police unit that was supposed to apprehend him, with the Greatest Detective’ L’. L suspected Light was Kira but had no proof, so they collaborated; both being incredibly intelligent, they had a back-and-forth.

So, if you ask what anime characters are INFP, you will surely get Light’s name. Yagami declared himself a god after killing L, claiming that his sole purpose in life is to fulfil justice. Finally, the Shinigami who handed him the book murdered him, just as he had promised at the start.

Nagato was a resident of the secret rain village who was always embroiled in a conflict that claimed the lives of numerous children. Nagato was one of them; he had lost both of his parents and was left without food, drink, or shelter. Nagato moved in with two other youngsters, and Jiraiya (renowned hidden leaf ninja) took them all in for a few years.

Nagato awoke the world’s most powerful eyes, Rinnegan, and worked to realise his ideal of a world free of conflicts and hatred. Unfortunately, he chose the wrong road and founded an organisation that, in the name of peace, slaughtered many people. Nagato transformed into Pain after killing his master Jiraiya and then destroying the leaf village to achieve peace.

He recognised there was still hope in the world after his conversation with Naruto, so he used his Rinnegan to resurrect all of the leaf villagers he had slain and perished in the process. One of the best INFP T characters anime, Pain is a highly loved character.

When he and his brother attempted to resuscitate their mother, Alphonse Elric, the protagonist’s sibling, lost his entire body. He had been living in armour for many years and was on a quest to reunite with his brother. Alphonse was a kind man who even spoke highly of villains.

He has a strong sense of justice and tries all in his ability to attain it while also assisting those who are in need. Because of his nature, Alphonse attracted new friends who were devoted to him and willing to lay down their lives for him. They also made it a point to assist him in his quest to reclaim his body. He is one of the strongest INFP anime characters .

The last name in our list of best INFP anime characters, Gaara serves the purpose of being on this list. Gaara, the Kazekage of the secret sand town, is at the top of the list since he is an INFP anime characters. He was revealed to be a very kind-hearted youngster earlier in the series. Gaara became a cold-hearted murderer who killed so that he might receive some type of acknowledgement from humanity, despite the villagers’ hatred and revulsion due to a tailed beast locked in him.

Gaara became the head of his village and a close friend of Naruto after redeeming himself, and he was willing to give his life for him if necessary. He is a quiet individual who only speaks to his brothers, Naruto, or his people when necessary. He is not bashful, but he prefers to talk only when required.

Anime characters are deep and contrasting from another. They are written for more thought-provoking ideas. In this article, we looked upon the best INFP anime characters. We hope this article was entertaining for you.